Mara Elephant Project’s ability to deploy two ranger units protecting the precious Mau Forest in the Maasai Mara in 2020 increased protection in the forest for wildlife by deterring poaching and habitat destruction. Sheldrick Wildlife Trust (SWT) funds these two boots on the ground units and their impact, especially in 2020, cannot be overstated. In a year where MEP saw the highest numbers ever in bushmeat poaching and illegal logging and charcoaling, these 16 Maasai men and women that make up the SWT Mau De-Snaring Units managed to carry on despite the great pressures the virus put on the Mara.

The partnership model MEP promotes became crucial during the pandemic to address these additional challenges. In 2020, the SWT Mara De-Snaring Unit rangers partnered with not only Kenya Wildlife Service (KWS) and Kenya Forest Service (KFS) but also the Bongo Surveillance Project (BSP) on many successful joint patrols. 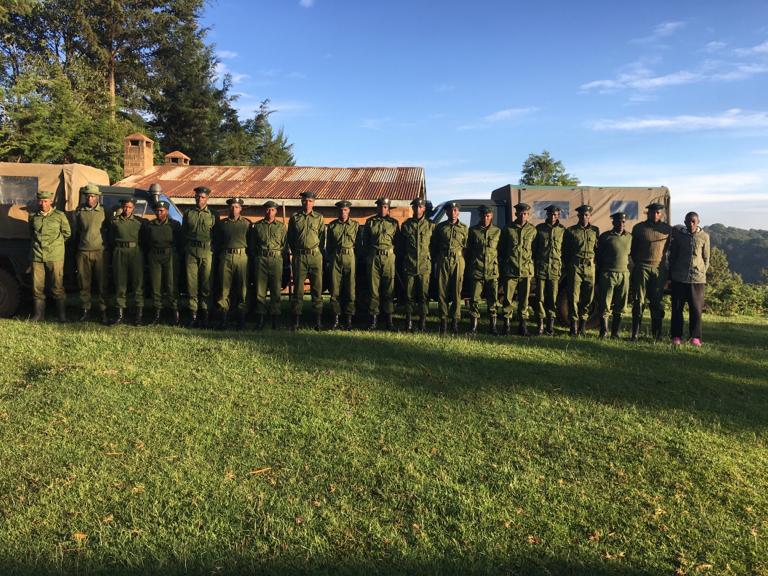 The full complement of rangers from the SWT Mau De-Snaring Units photographed in January 2020. By July 2020, both MEP and BSP were reporting very high levels of bushmeat poaching using snares in the Mau Forest; this was especially concerning given that there are probably less than 20 bongo antelopes left in the forest. BSP CEO Mike Prettejohn reported that in July their trap cameras only took one fleeting photo of a bongo the whole month. This continued into August and September, when the “Charlie Team” removed over 60 snares in just one week in September; adding to the total of 147 snares removed that month alone. In November, it was day after day of collecting snares alongside our partners, ending the month with seven total arrests in one week for bushmeat poaching. Joint operations were critical during these times to increase protection for wildlife living in the forest. The joint MEP/SWT Mau De-Snaring Units patrols with BSP, KFS and KWS in 2020 resulted in a total of 379 snares removed and the seizure of 85 kilograms of bushmeat, one antelope skin, one bow and three arrows, the destruction of two poacher’s camps and arrest of 14 suspects for bushmeat poaching. MEP/SWT rangers removed 32 snares on one day, July 29, in the forest. Snares removed and an arrest made by rangers in September. The MEP/SWT Mau De-Snaring Units are also focused on shutting down illegal habitat destruction activities in the forest day and night. One of the larger busts in 2020 included one on September 26, when the “Echo Team” stationed in the Chepsir Forest in the Kericho area of the Mau uncovered a total of 56 bags of charcoal in two separate operations. During one of these operations, they discovered 17 donkeys transporting 49 sacks of charcoal out of the forest. To give you an idea of what it was like in November, here is an example of these teams at work over a two-week period.

-> November 4: two suspects arrested for producing charcoal in the forest

-> November 13: Arrested one suspect transporting timbers made from the illegally cutdown logs on a motorbike and discovered a larger tractor carting the timbers out of the forest, 21 in total.

-> November 16: Arrested five suspects for charcoal production, destroyed four active kilns. Later that night, they set up ambush sites to catch people leaving the forest with timbers and arrested one additional suspect with timbers on a motorbike.

-> November 18: Arrested three suspects transporting logs out of the forest. One of the arrests in November of two suspects carting charcoal out of the forest on donkeys.

In total for 2020, the teams alongside partners destroyed 110 kilns, 190 bags of charcoal and seized a total of 728 illegally logged timbers, 122 logs from cutdown trees and 4,218 posts. They also confiscated nine power saws and arrested a total of 149 suspects for illegal logging or charcoal production activities. A kiln being destroyed by the team in August. While the SWT Mau De-Snaring Units were mainly focused on shutting down illegal activities related to habitat destruction and poaching, they were also tasked with mitigating conflict in 2020. In April, there was record flooding in the Mau Forest (pictured left: rangers navigating swollen rivers and streams while on patrol in the forest). The reclaimed areas of the Mau Forest from 2019 were recovering extremely fast due to the large amount of rain; however, unfortunately, there were some landslides as the reclaimed areas are still recovering from the loss of tree cover and intensive farming.

MEP and Seedballs Kenya distributed 800 kg of Dombeya and Cedar seed balls on land slides in the Mau in 2020 and in October, a tree planting ceremony took place alongside government and MEP CEO Marc Goss attended a joint celebration of the one-year anniversary of the Maasai Mau Forest reclamation. CEO Marc Goss at the tree planting ceremony in October.

In addition to increasing protection in the Mau Forest, the SWT Mau De-Snaring Units helped bordering communities stay safe during the pandemic. On July 7, rangers distributed masks donated by Paradise International Foundation in the Naisoya area of the Mau Forest; a very remote community that lives alongside the forest (pictured left). Keeping the community safe during the COVID-19 outbreak has been a top priority for MEP. Additionally, the pandemic brought about challenges for all patrol groups operating in the field and personal protective equipment, or PPE, and proper hand washing stations became vital to ensuring we can do this essential work safely. On May 8, the SWT Mau De-Snaring Unit supported our partners KFS by delivering PPE along with materials for mobile hand washing stations to the KFS ranger posts around the Mau Forest. The distribution included nine super drum containers, 15 litres of hand sanitizer, nine spray bottles and 100 face masks. PPE distribution in May.

The ecological, social and economic significance of the Mau Forest to Kenya, the Eastern African region, Africa and the world, cannot be overemphasized and the Sheldrick Wildlife Trust’s grant to support the two MEP Mau De-Snaring Units is addressing the widespread destruction and security threats head on into 2021.