Fitz, His Herd & His Home Remain Protected Thanks to Angama Foundation’s Support

In 2019, the Angama Foundation granted Mara Elephant Project $26,000 for the protection of an elephant and their herd for three years through MEP’s approach of collaring, monitoring and data collection. The 20-year-old bull elephant, Fitz, was collared by Kenya Wildlife Service (KWS) and MEP on August 20, 2019, in the Nyakweri Forest. Fitz, who resides in a herd of 60 elephants, was chosen based on a need to increase protection in his home, the Nyakweri Forest, and to help MEP and KWS rangers react to conflict protecting not only Fitz and his herd, but the community bordering the forest. Collared elephant Fitz takes after his namesake Steve Fitzgerald, founder of Angama, who pushed boundaries in the short term in order to make progress in the long term. Fitz photographed by MEP rangers while on patrol in July 2020.

Monitoring Fitz and his herd’s movements in the short and long-term fulfills two important MEP objectives that will protect elephants and their habitats across the Greater Mara Ecosystem (GME) which aligns with the goals set out in the National Elephant Action Plan. 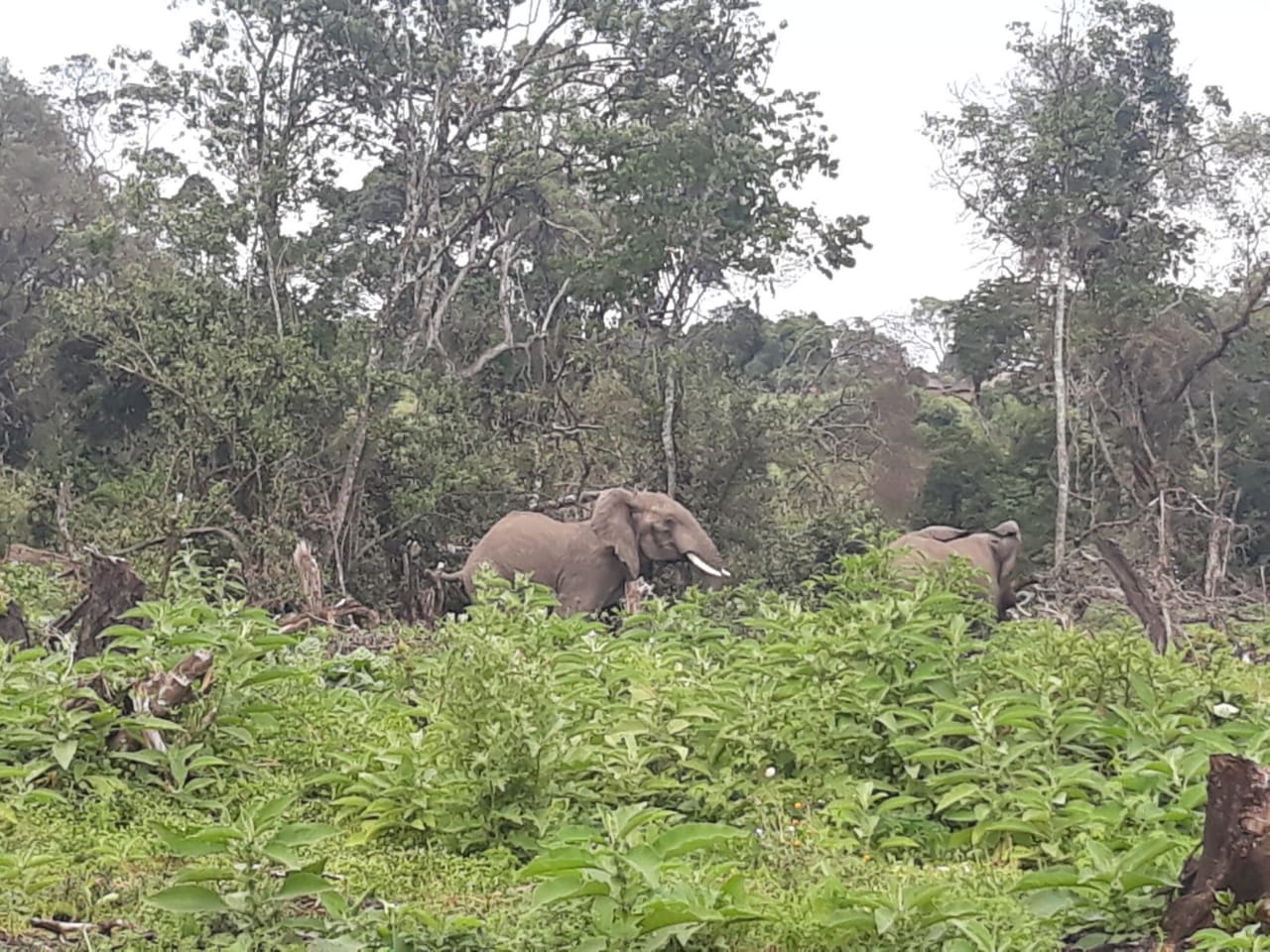 Fitz photographed by rangers in the Nyakweri Forest in December 2020. The first is that the Nyakweri Forest is under threat and being subdivided at an alarming rate by illegal logging and charcoal operations. Pictured left: MEP and KWS rangers found an illegal logging operation in the Nyakweri Forest in January 2021 and arrested one suspect with 250 posts and 105 timbers and recovered a power saw. The forest area is changing so fast that we are seeing the movements of this herd change to accommodate the human encroachment. Understanding the elephant movement changes as the forest changes is essential to finding a long-term solution and will help MEP define corridors between the Mara Triangle, Olosukut Conservancy and Nyakweri. In the short-term, this ranger team’s presence in the forest has deterred illegal activities inside the forest, which increased exponentially in 2020 due to the loss of revenue as a result of COVID-19. In 2020, MEP saw the highest level of illegal logging and charcoal production in our history. As recently as late March, the MEP “Alpha” ranger unit uncovered a charcoal making operation and confiscated 90 bags of charcoal and destroyed three kilns. In total over the last year, MEP rangers stationed in the Nyakweri Forest confiscated 118 bags of charcoal, 18 power saws, 1,416 illegal timbers, 8,865 illegal posts and one illegally cutdown tree. MEP rangers alongside KWS officers and other government partners destroyed 18 kilns and arrested 50 suspects for habitat destruction activities. The MEP “Alpha” ranger unit alongside KWS arrested two suspects and confiscated one power saw that they were using in the forest to cutdown logs to make charcoal in May 2020. KWS and MEP rangers arrested three suspects carting 300 timbers out of the Nyakweri Forest on a tractor in September 2020.

Rangers note elephants they spot while on patrol in the forest and input their location into MEP’s EarthRanger system so our team can see in real time where logging or charcoal sites have been shut down in relation to elephant movements inside the forest. This helps paint a broader picture and identify patterns to inform future ranger patrol. In the long-term, Fitz’s movements are particularly useful to show changes over time in response to changing environmental and anthropogenic conditions. We are now seeing Fitz and his herd move differently in the forest based on where charcoal and illegal logging sites are located. That’s why the ongoing collection of data and further analysis must continue to provide the evidence underpinning the communications and advocacy efforts of the organization to protect this critical habitat into the future. This mission is essential for not only elephants, but all wildlife that are represented by this umbrella species. The MEP “Alpha” ranger unit destroyed two kilns discovered inside the forest in May 2020. MEP rangers alongside KWS arrested one person transporting four sacks of charcoal on a motorbike out of Nyakweri Forest to sell at a nearby shopping center in July 2020. The second objective is that Fitz and his herd are habitual crop raiders, which gets them into trouble with farming communities surrounding the forest. Pictured left: Elephants from the Nyakweri Forest were raiding nearby maize farms in Kilye in July 2020, and MEP rangers responded to assess the damage, speak with the community and come up with a plan to keep the elephants away. In the short-term tracking his movements have provided MEP with an early warning to conflict. The MEP rangers stationed in Fitz’s area respond regularly to his crop raiding in nearby communities. Luckily, our commitment to mitigating this conflict helped to ease rising tensions in the area between wildlife and communities and provided an increase in much-needed food security for people struggling during the pandemic. Fitz and his herd were raiding crops in the Olkireruki area in September 2020 and MEP rangers responded to push them back into the forest.

The Angama Foundation’s continued commitment to protecting Fitz, his herd and his forest has made an impact during an especially difficult year. Mara Elephant Project is celebrating 10 years, our kumi anniversary, in 2021 and our success would not have been possible without support from partners like Angama.