Mara Elephant Project has just released the 2016 Annual Helicopter Report which details all of the flight hours the helicopter has completed in 2016.

2017 is the first year in history that the Maasai Mara in Kenya has had a dedicated helicopter for conservation. In 2015 Karsten Ree, owner of Karen Blixen Camp, purchased a new Robinson R44 Raven II in the USA and sent it to Kenya; around that same time he sent Mara Elephant Project (MEP) CEO Marc Goss to the U.S. for training to get his helicopter pilot’s license. The MEP and Karen Blixen Camp Trust (KBCT) partnership developed with the goal to operate within the large and diverse greater Maasai Mara ecosystem to protect wildlife and more specifically elephants, a landscape species. The helicopter (5Y REE) has become a critical tool for moving elephants out of conflict areas, monitoring elephants over a large area, providing rapid security response, collaring elephants, deploying the Kenya Wildlife Service veterinarian to treat injured wildlife, and providing Emergency Medical Services to remote communities.

Reacting to Conflict: This year MEP flew 55.89 hours mitigating human-elephant conflict (HEC) in the greater Mara ecosystem. When MEP gets a call from the community on our hotline about elephants in danger, a ranger team is sent to the location on the ground to move the elephants. They use their vehicle, flashbangs, spotlights and blank ammunition to persuade the elephants to leave the farms. If the ground team has exhausted all of their tools and the elephants are still in danger, they are able to call for the helicopter to help. Most of the flying time in response to conflict has involved moving elephants out of farmland and into conservation areas. Using the helicopter to move elephants out of farmland.

Elephant Monitoring: In 2016 we flew 56.71 hours monitoring MEP’s 22 collared elephants and their respective herds. MEP and KBCT believe that responsible elephant tracking involves aerial monitoring of all of the collared elephants each month. Through the monthly aerial monitoring flights we are able to collect valuable data on how many elephants the collars represent (approximately 600 individuals), proximity to livestock and settlements, herd composition, injured animals, and provide general security to the herds. During the monitoring flights, if we see that the elephants are in or close to a conflict area, we move them into safety.

Photographic evidence of an elephant herd collected during a monthly aerial monitoring operation.

Security: MEP flew 23.4 hours for security-related issues, with the majority of these flights ensuring we can rapidly and strategically deploy rangers. The potential for the helicopter to be a target is high, and while spears and arrows (conflict cases) won’t bring a helicopter down, rounds from a firearm certainly could. To mitigate this risk we always make sure we have intelligence on the ground before going into a conflict area. Additionally, MEP has had two donated body armor vests, which we can unfold to sit on while in the helicopter.

Elephant Collaring: We flew 16.51 hours for collaring five elephants: Kiambi, Ivy, Bobo, Courtney and Ol Choda. The helicopter provides an excellent vantage point from which the vet can dart the elephants, especially on broken ground or in areas with thick cover. The collared elephants allow MEP to deploy rangers strategically, alert us of geo-fence breaches into conflict areas, and collect data on elephant movements to inform policy. Sky Vet Services: We flew 22 hours for vet services on 10 missions to treat injured elephants, a rhino and a giraffe. In these cases the injured wildlife were in inaccessible areas for ground teams to respond. Carrying a man injured by an elephant in November.

General Support: We flew 11.5 hours for general support of the area that MEP operates in. These flights included going to key meetings with partners and checking on two bush fires. 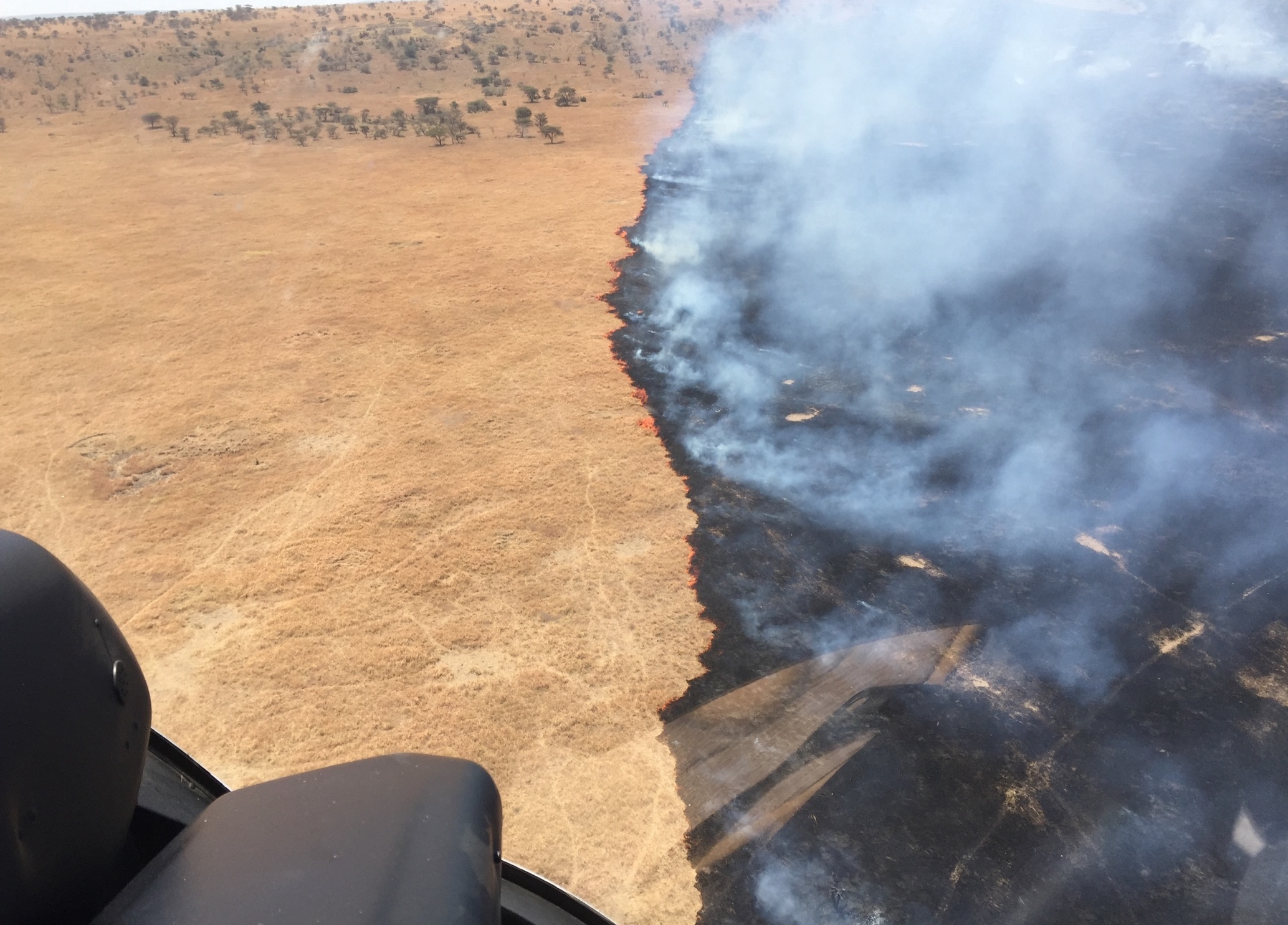 Fire in the Olare Orok Conservancy.

MEP’s focus for 2017 includes developing a standard operating procedure for the helicopter, raising $150,000 for conservation flying which will allow for approximately 30 hours of flying time per month, developing a joint funding model with conservancies and government agencies, increasing operating costs from $300 to $400 an hour to reflect cost of buying a new helicopter after five years and revisiting insurance options for possibly cost savings.

“The last year of flying in the Maasai Mara has been exciting, and totally changed MEP’s ability to successfully complete conservation missions. The helicopter has proven itself time and time again and because of this effectiveness, conservation organizations, and the government continue to rely on the helicopter for support. This has helped further develop and cement the good working relationships MEP has with these partners and the local community.” MEP CEO Marc Goss

The helicopter program depends on donor support to keep it in the air and all donations go directly to conservation-related missions.